Today we’re going to investigate a topic you may never have considered before: Was there cuddling in Eden?

The account in Genesis of the Garden of Eden is very brief. We only have a few pages of text to paint an image of God’s kingdom on earth before it deteriorated into corruption. Given the lack of information about the world in the beginning, we have to use our imagination and our reasoning to help fill in some of the details and to connect some of the dots. There is no direct evidence of cuddling anywhere in the Genesis account of God’s perfect world, but I believe there is enough circumstantial evidence to suggest there likely was cuddling in Eden.

The first piece of evidence to consider is from Genesis 2:25 where it says, “And the man and his wife were both naked and were not ashamed.” So humans were naked in Eden. This much is clear from the Genesis account.

Now consider in Genesis 3:8 where it says, “Then the man and his wife heard the sound of the LORD God as he was walking in the garden in the cool of the day, and they hid from the LORD God among the trees of the garden.” This passage takes place immediately after the fall. The act of hiding from God is a symptom of our fallen state, as indicated from the surrounding passages, but the part of this passage I want to highlight here is that there was a “cool of the day” in Eden. Contextually, I believe the cool part of the day is not the result of man’s fallen state but rather is part of the good arrangement God created in the beginning. It is tied to the cycle of evenings and days put into place during the seven days of creation. So in God’s original and perfect arrangement in the beginning, Got determined that it was good for there to be a cool part of the day.

Now let’s consider a third passage. In Genesis 2:20 it reads, “And the man gave names to all the cattle, and to the birds of the sky, and to every beast of the field, but for Adam there was not found a helper suitable for him.” In this passage Adam is looking for his mate, namely Eve, and could not find her among the animals because she had not yet been created. So God creates Eve, and Adam instantly recognizes her as his match and rejoices over her. The part of this passage I would like to point out is the descriptor of “helper” used to describe the animals. The hebrew word is ezer and is elsewhere used to describe Eve and also to describe God (Psalm 33:20 and in dozens of other places). It denotes someone of great benefit to the individual, in some cases even suggesting an indispensable quality. In what way then would animals be our helpers-of-great-importance?

As it states very clearly in Genesis 1:29, “I give you every seed-bearing plant on the face of the whole earth and every tree that has fruit with seed in it. They will be yours for food.” So God clearly did not have in mind that animals would be our helpers by being food for us to eat. They must be our helpers in some other way. It says in Genesis 2:15, “God took the man and put him in the Garden of Eden to work it and take care of it.” So it’s possible that animals helped us to take care of the garden in some way. But was that their only purpose? As noted in Genesis 2:20 quoted in the previous paragraph, Adam named each of the animals. This suggests he had a close relationship with them. In order to make sense of what way the animals must have been our ezers, let’s consider all the evidence together that we’ve gathered thus far:

Given these pieces of evidence, it is at least plausible that during the cool parts of the day, and perhaps also throughout the night, animals would provide warmth to the man through cuddling. This would explain why they are referred to as our necessary helpers – our ezers. God didn’t say “It is not good for man to be naked. I will therefore make him furry and able to withstand the cool parts of the day and evenings alone.” Instead God said, “It is not good for man to be alone” (Genesis 2:18). To me this suggests that God found it good that mankind needed the animals for daily warmth, among other things. By cuddling with the animals, each of which we know by name, we reinforce our bonds of unity with each animal and rely on each other for necessary warmth. In this way we are continually each other’s ezer. And God saw all this as good and part of his perfect plan for the earth. Again, the evidence for this is circumstantial and I’m admittedly making some inferences, but I wanted to start off by showing first that this explanation is plausible and consistent with the limited amount of evidence we have available to us in the Genesis account. Now let’s consider whether it is also likely. 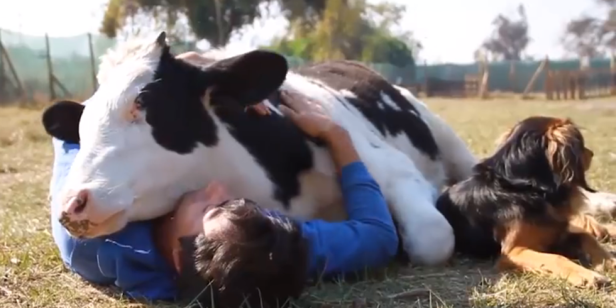 As we look around the world today at animals, both domestic and in nature, we see animals cuddle together and they learn to do so as babies. We see a mother and her babies all cuddled together. We see siblings cuddle. Cuddling not only generates physical warmth but also a feeling of comfort and security and a sense of connectedness between the cuddlers. This is why we see cuddling as one of the hallmark signs of a family or community, both in humans and in animals. Cuddling is quite often, in its most basic form, an expression of philia or kinship love.

Is cuddling therefore one of the good parts of God’s created world or is it a fallen behavior? No mention is made of it in the warnings after the fall, and based on the positive feelings associated with cuddling, it would be consistent with a perfect life in Eden. Therefore it makes more sense to me that it has its origin in Eden as one of the many good properties of the world God envisioned and created in the beginning, rather than being a product of the fallen world.

So where did things go wrong? When did cuddling with animals cease to be the norm?

Animals became afraid of mankind when we began seeing them as food rather than as our friends and helpers (Genesis 9:2). That fear caused them to begin fleeing and hiding from our presence, just as Adam and Eve fled from God’s presence out of fear after the fall. We thereby lost our dominion and also our connectedness to the animals. Along with that connectedness, we presumably also lost the physical act of cuddling.

Or maybe we lost that even earlier?

One of the first mentioned acts after the fall is hiding and clothing out of fear (Genesis 3:7). First the clothing of fig leaves and then that of skin, presumably animal skin (Genesis 3:21). So instead of being unafraid and cuddling with our living animal friends, we are afraid and kill the animal to take their skin to cover ourselves. Cuddling provides a mutual benefit between the two cuddlers whereas killing the animal to take their skin is parasitic and born of fear, which is very clearly described as a fallen behavior that was not present prior to the fall.

Given that we see animal babies cuddling with their siblings and with their parents, we see people cuddling, and we see a need for clothing after the fall but not before, it seems most likely to me that cuddling with the animals is the link that makes the rest of the story make sense. Cuddling warms the body and the heart and is born of love. Since God is love (1 John 4:8), I believe it is most likely that cuddling originated with God and was part of his good plan for the earth from the beginning. Moreover I believe it was lost during the fall when fear was introduced into the world, necessitating the use of animal skin to keep warm in place of cuddling with the living creatures of the earth that we know by name.

I’d like to say one more thing about our inherent need for cuddling. It is not merely a matter of staying warm in the cool parts of the day. There is something fundamentally necessary that goes beyond temperature control. Several scientific studies have shown that babies require a great deal of physical touch in order to develop properly on an emotional, cognitive, and even physical level and that animals are the same way. We appear to be designed such that physical closeness to each other is necessary for our health and well-being. The loss of cuddles with the animals and thereby the loss of closeness with them after the fall would partly explain the misery and hardship of Adam and Eve (Genesis 3:19, Genesis 3:16), despite being clothed and thereby protected from the low temperatures of their environment. Staying warm is only part of why cuddling is necessary. It is also needed in order to continually renew our sense of philia or kinship with the animals and with all of creation.

Ok so what if I am right? What if cuddling was in fact a thing that happened in Eden? What is the relevance of this revelation for us today?

If cuddling is good and originated in Eden when the world was perfect, it will very likely be part of the afterlife of the restored world. The fall represents a deviation from God’s plan for the earth. To repent (i.e. to turn back) and to no longer deviate from God’s plan for the earth means to work toward restoring the earth to the way God intended it to be from the beginning rather than to continue destroying the earth and rejecting his ways (Revelation 11:18). If cuddling with animals was part of God’s plan for the earth, then we ought to make great effort to restore our relationship with the animals. Not only is it better for the animals but it is also necessary for our own well-being to regain our ezer and thereby our dominion over creation. It may not be sufficient, but if my analysis is correct, restoring our relationship with our animal ezers is certainly a necessary component to unburdening ourselves of our lives of hardship and misery in our fallen state.

Lastly, it helps bring to life the prophecy in Isaiah 11:6, which promises, “The wolf will live with the lamb, the leopard will lie down with the goat, the calf and the lion and the yearling together; and a little child will lead them.” Are they merely sitting beside each other unafraid or are they cuddling in the cool part of the day as God intended? And in what way will a little child lead all the animals? The child will lead the way Jesus leads – through love. And if cuddling is a way to show love, we all know how eager children are to run up and hug an animal. This is true dominion. This is how we ought to lead. We must change and return to God’s ways. As Jesus put it, “Truly I tell you, unless you change and become like little children, you will never enter the kingdom of heaven” (Matthew 18:3).

6 thoughts on “Was there Cuddling in Eden?”