Why did God ask for animal sacrifices?

The most straightforward answer, if you look through the Old Testament books, is that the purpose of animal sacrifice was to atone for sin (Exodus 29:36). But then it tells us in Hebrews 10:4, “It is impossible for the blood of bulls and goats to take away sins.” Continuing to speak about the priests who carried out such sacrifices, it says “Every priest stands daily ministering and offering time after time the same sacrifices, which can never take away sins” (Hebrews 10:11). So why then did God ask for these animal sacrifices as atonement for sin if they had no power to take away sin?

The common view is something along the lines of, “God used to desire animal sacrifices but no longer desires them now that Jesus made the perfect sacrifice and appeased his bloodlust.” Whether or not God is a bloodthirsty God (which I do not believe God is), this answer still begs the question: Why did God ask for the animal sacrifices in the first place if they were insufficient?

In Colossians 2:17 it says, “These are a shadow of the things that were to come; the reality, however, is found in Christ.” So if the animal sacrifices were merely a foreshadowing of what God really desired (i.e. Jesus’ sacrifice), does that mean God did not actually desire them?

The short answer is yes, God never desired them, nor did he gain any pleasure from them. There is plenty of scriptural evidence to support this fact. For instance, in Psalm 51 it says, “You do not delight in sacrifice, or I would bring it; you do not take pleasure in burnt offerings” (Psalm 51:16). In Jeremiah 7, God says: “For in the day that I brought them out of the land of Egypt, I did not speak to your fathers or command them concerning burnt offerings and sacrifices” (Jeremiah 7:22). And in the first chapter of Isaiah, “The multitude of your sacrifices– what are they to me?” says God… “I have no pleasure in the blood of bulls and lambs and goats” (Isaiah 1:11).

My reading is that God was trying to teach us something. Jesus said in Matthew 9:13, “Go and learn what this means: ‘I desire mercy, and not sacrifice’.” Jesus was referencing a passage from Hosea which reads: “For I desire mercy, not sacrifice, and acknowledgment of God rather than burnt offerings” (Hosea 6:6). So how are these two things connected? How can someone learn mercy through a violent and cruel act of slaughtering a creature that belongs to God?

The answer to this riddle, which requires ears to hear, is that you can’t and it was a test to reveal what is in our heart. Just as God commanded Abraham to sacrifice Isaac in Genesis 22 despite that not actually being the thing God desired, God commanded animal sacrifices despite that not really being the thing God desired. The thing God has always desired is for us to turn away from our violent sinful ways and to turn back to God’s way of lovingkindness and faithful stewardship over the whole earth and all its creatures. 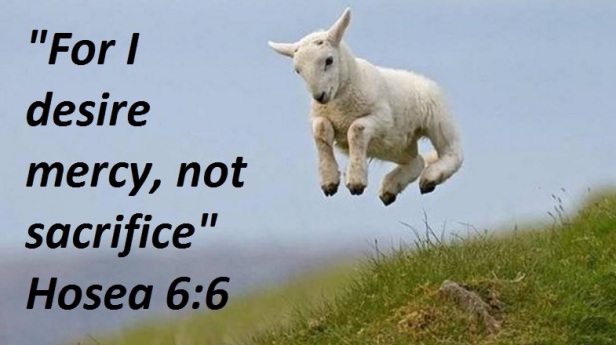 In Chapter 12 of the Gospel of Mark a teacher of the Mosaic Law came to Jesus and asked which commandment is the most important of all. After hearing Jesus’ response, he said, “To love God with all your heart, with all your understanding and with all your strength, and to love your neighbor as yourself is more important than all burnt offerings and sacrifices” (Mark 12:33). The next passage goes on to say, “When Jesus saw that he had answered wisely, he said to him, “You are not far from the kingdom of God”” (Mark 12:34). God rules with a merciful hand and desires us to likewise embody the spirit of mercy, as Jesus says in Luke 6:36, “Be merciful, just as your Father is merciful.” This mercy is not to be withheld from anyone, whether concerning a kingdom subject, a human or animal neighbor, or even an enemy (Matthew 5:44).

To elaborate further on this point, when someone has power over someone else, whether it is a king over their kingdom subjects or a person over a defenseless animal, the latter is at the mercy of the former. A king can order the death of a subject for no reason at all and it will be done. Likewise a person can slaughter an animal and the animal has essentially no recourse to stop it. This only represents one possible use of the power though. The one in the position of power also has the power to have mercy on the latter. The king, instead of requesting the head of the subject, can let the subject go free. Likewise the person with power over an animal can slaughter the animal or can show mercy toward the animal and let the animal live. Just as we have always had the power to turn to God or to turn away from God, we likewise have the power to choose mercy or to turn away from it.

Given this unique choice each person has while the knife is still in their left hand and the animal’s throat in their right hand, let us reconsider the “annual reminder of sin” (Hebrews 10:3) that animal sacrifices represented each year. The myriad Israelites would purchase animals in the temple courts and then would return a few days later to slaughter the purchased animals. The purpose was to atone for their sins. But as we have already demonstrated, such sacrifices could not possibly atone for their sins. This point is reiterated in Hebrews 10:4 where it says, “It is impossible for the blood of bulls and goats to take away sins.” So why did the Israelites do it? How did God feel about such annual rituals of slaughter?

In Jeremiah it says, “The people of Israel and Judah have done nothing but evil in my sight from their youth; indeed, the people of Israel have done nothing but arouse my anger by the work of their hands, declares the LORD.” (Jeremiah 32:30). Not only did God not desire the animal sacrifices, but God was angered by them! So if God was so strongly against animal slaughter, what was the purpose of the laws concerning animal sacrifice?

In case you haven’t yet made the connection, God was teaching us to be merciful. Instead of trying to cover up (the literal meaning of the Hebrew word ‘kaphar’, translated as “to atone” is “to cover up”) our transgressions by slitting the throat of an animal we have power over, we should instead have mercy on the animal and let the animal under our power go free. As it says in Matthew 5:7, “Blessed are the merciful, for they will be shown mercy,” and again in James 2:13, “judgment without mercy will be shown to anyone who has not been merciful. Mercy triumphs over judgment.”

To think of it another way, each time someone is in a position to slaughter an animal, they are also in a position to choose mercy over sacrifice. Each time that they reject mercy, they fail to act according to the way God desires them to act. God does not desire, let alone require animal slaughter. On the contrary, God wants us to choose mercy as the just and good use of the power God has bestowed upon us and thereby triumph over the merciless abuse of power that the flesh desires to exercise instead. To put it another way, God desires us to “set the captive free” (Luke 4:18, Isaiah 61:1, Isaiah 58:6). 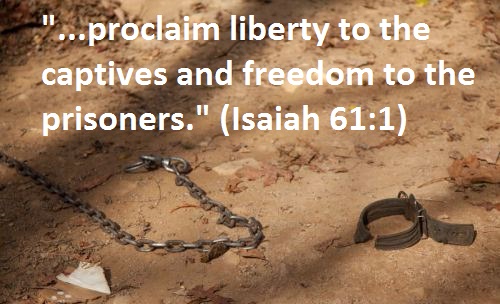 Jesus gave an unmistakable example concerning releasing the animals instead of slaughtering them when he went into the temple courts where animals were being sold for the annual Passover slaughter and he overturned the tables, drove out everyone selling animals, and set the animals free. Many interpreters prefer to focus exclusively on the moneychangers in the story and make the account entirely about money. While money was certainly part of what it was about, to neglect the significance of the animals being set free is to miss an important part of the story regarding mercy.

Jesus took a stand against animal slaughter, both in action (freeing them from the temple court) and in word (Hebrews 10:8). He also instituted a new tradition of mercy to replace an old tradition of cruelty. Instead of slaughtering a lamb each year to remember our sins, he told his followers to break bread and drink the fruit of the vine in remembrance of being saved from our sins (1 Corinthians 11:24). By accepting Jesus’ unblemished offering once and for all, we are to turn away from the practice of animal slaughter that defined the old covenant and instead live mercifully. The new covenant is defined by love for each other rather than the shedding of innocent animal blood. As Jesus put it, “My command is this: Love each other as I have loved you.” He did not say, “Continue slaughtering lambs in the name of God but rename the Passover holiday ‘Resurrection Sunday’.” Instead he said to break bread and drink from the fruit of the vine. How many fail to hear his voice and continue in their old merciless ways?

The savior of the world’s name (and therefore his purpose) is Yeshua, which literally means “God saves,” because “he will save his people from their sins” (Matthew 1:21). Jesus willingly laid down his life, walking to his own death “like a lamb to the slaughter” as prophesied in Isaiah 53:7, to show us what it means to desire mercy over sacrifice. He walked alongside the animals being slaughtered on that Passover holiday and had his own blood shed rather than being the one mercilessly shedding the blood of the animals. Jesus said in Matthew 25:45, “Truly I tell you, whatever you did not do for one of the least of these, you did not do for me.” If we do not show mercy toward the least of the animals, whether a cow, a chicken, a goat, a pig, a camel, a dog, a turkey, or any other beloved creature of God, then we do not show mercy toward the Lamb of God.

Whenever someone tries to justify their decision to slaughter animals by pointing to passages of God “requiring” or “desiring” animal sacrifices, know that their hearts are hardened and that they do not have “ears to hear” (Psalm 40:6). They have not yet learned what it means to “desire mercy, not sacrifice” (Hosea 6:6). We should instead follow in the footsteps of Jesus, encouraging against the practice of animal slaughter while teaching and showing mercy to all of God’s creatures. Mercy is the only way out the fallen world of sin. Jesus said, “I am the way and the truth and the life. No one goes to God except through me” (John 14:6). Jesus showed the way is to live according to the spirit. As it says in Galatians 5:22-23, “But the fruit of the Spirit is love, joy, peace, forbearance, kindness, goodness, faithfulness, gentleness and self-control. Against such things there is no law.” Let us go and bear fruit, exercising our authority over all of God’s creatures the way Jesus exercises his authority over us – mercifully.

2 thoughts on “Mercy and Animal Sacrifice”